Performance is measured as positive predictive value (PPV); it measures TP/(TP+FP), the ratio of true positive calls over all true and false positive calls. It informs us how much cross-calling has been observed between the desired barcode pairs. It is also known as precision. In order to compute a PPV, distinct amplicons of known lengths and origin are barcoded, sequenced, demultiplexed, and mapped back to the set of known references. With this approach, true and false positive calls can be counted per barcode pair. The resulting PPV is due to misidentification by the demultiplexing algorithm, caused by many different external factors, such as poorly synthesized barcode molecules, contamination between barcode wells, and insert contamination during the library preparation.

Depending on the barcoding mode, same or different barcodes on the ends of the insert, and the number of barcodes used, PPV varies.

Examples for different barcoding schemes, (x) indicating use of a barcode pair:

Following libraries contain 2kb amplicons with vector-sequence-specific primers amplified. Sequencing movies are 6 hours long with additional 2 hours pre-extension. The instrument version is 5.0.0 and the chemistry is S/P2-C2. For each ZMW, all sequenced barcode regions were respected.

The yield is, after the PPV, the next most important metric. Lima removes unwanted barcode pairs that are undesired to increase PPV, accepting a decrease in yield.

Example 384-plex symmetric (look at the bars above the x-axis): 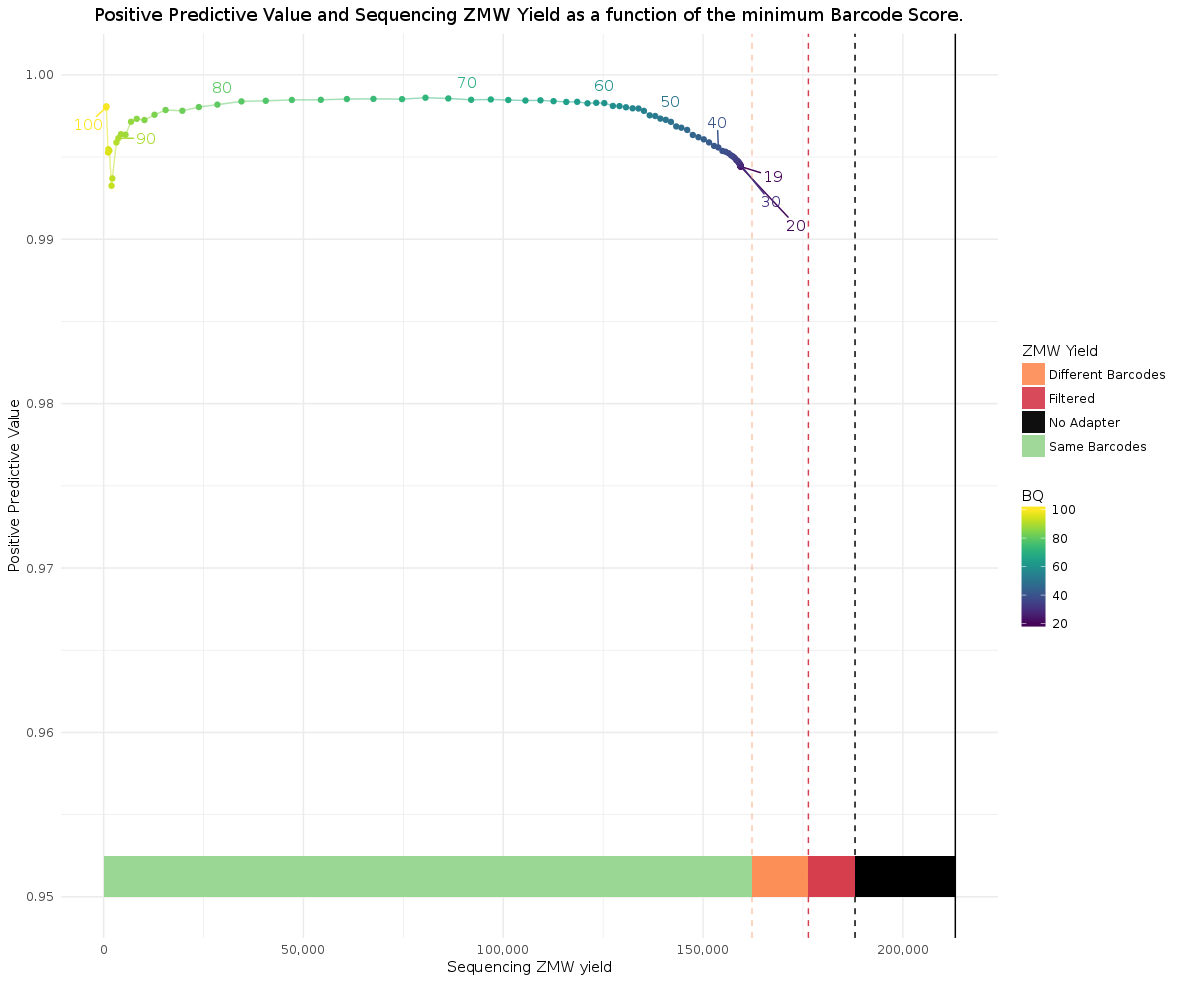 Compare it to a 384-plex asymmetric run:

The reason behind the yield decrease for asymmetric is, in order to identify a ZMW as asymmetric, both flanking barcodes of an insert have to be observed; ZMWs whose polymerase read does not contain at least two adapters have to be removed. In contrast, for the symmetric case, it is sufficient to see a single barcode region.

Following the raw numbers for the PPV/Yield curve below. Yield percentage is w.r.t. the 1937358 ZMWs from above. The initial 0.44% yield loss is due to how we process the data for PPV analaysis, requiring at least a 600 bp mapped to the originating reference.